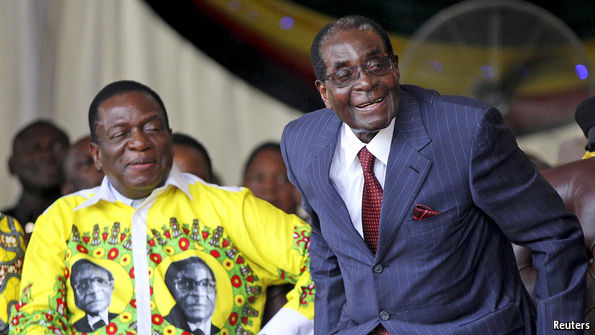 IN MANY of the poorest African dictatorships of recent decades, the best-paved road ran from the presidential palace to the airport, in case the Big Man and his entourage needed to escape in a hurry. That is still the case in Harare, Zimbabwe’s capital, where the president’s cronies know that they are not universally popular.

Some leading figures in ZANU-PF, the ruling party, are said to have shipped belongings abroad already. Some apparently keep bags packed for the moment that Robert Mugabe, the 92-year-old president who has ruled for 36 years, keels over or is pushed aside in a palace coup. Others are said to be sleeping in different places every night, to confound potential assassins or soldiers who they think might be sent to kill or arrest them.

They have reason to be nervous. The regime’s collapse has often been predicted before, and the pundits, including this newspaper, have always been proven wrong. Still, Mr Mugabe cannot live for ever, and the economy is in an even worse state than usual.

Start with the doddering despot. Mr Mugabe has long kept his party in line by playing off one faction against another with Machiavellian skill and, in the words of a former cabinet minister, “charming you while preparing to stab you in the back”. Yet now he dozes off in meetings and suffers startling lapses in memory. Recently he is said to have delayed the start of a cabinet meeting because he was waiting for Joice Mujuru to arrive, forgetting that he had fired her as vice-president two years ago. To be fair, Mr Mugabe also has moments of lucidity. He may ramble, but his supporters note that few other men of his age can stand and deliver an hour-long speech. And he is adaptable in the face of infirmity: after reading the wrong speech at the opening of parliament last year he has taken to speaking off the cuff instead.

Yet potential successors are beginning to circle. Chief among them is his vice-president, Emmerson Mnangagwa (pictured, left, with Mr Mugabe), who once led the security service. The goons may decide to back the man they know and trust. This matters in Zimbabwe, where several party figures have died in mysterious car accidents or house fires over the years.

A faction in the party has pushed for Mr Mugabe to be succeeded by his wife, Grace, an avid shopper. But several of her leading supporters have been accused of corruption and their group, nicknamed the G40, is on the back foot. Moreover, her support in the party will probably count for little if Mr Mnangagwa has the army on his side.

Elections are scheduled for 2018. Mr Mnangagwa, however, is so widely disliked that he would find it hard to win even a rigged ballot. (He denies allegations that he was a cheerleader for the massacre of 20,000 people in Matabeleland in the 1980s, when he was Mr Mugabe’s intelligence chief.) Searching for allies, he has even been talking to members of the hopelessly divided opposition. Once in power he will probably try to cajole them into joining a coalition rather than risk them uniting against him. In this Mr Mnangagwa may have the support of Western governments who hope he will establish order quickly and start fixing the economy, and may turn a blind eye to his thuggery.

Mr Mugabe’s government has long tried to defy the laws of economics—one former governor of the central bank even insisted they did not “fully apply in this country”. But it takes real ingenuity to wreck the currency of a country that has adopted the American dollar.

The government has already ruined its currency once. After spending more than it collected for so long that no sane person would willingly lend to it, the regime cranked up the printing presses. By 2008 it was printing 100-trillion Zimbabwe-dollar notes that were worth less than a bus ticket. The hyperinflationary madness only stopped when the government scrapped the Zim dollar and started using American greenbacks instead.

Old habits die hard. Mr Mugabe’s government has again been spending too much. Despite solemn promises to the IMF to come close to balancing its budget, the deficit this year will be about $1bn, a massive 8% of GDP. It has been burning through its dollar reserves at such a clip that earlier this year it seemed unable to pay civil servants.

But the Reserve Bank of Zimbabwe can still be creative. It came up with a ploy to “print” American dollars by filching them from accounts in Zimbabwean banks and replacing them with worthless IOUs. Thus it turned each dollar into two dollars: one in electronic form in a bank (one might call it the Electronic Zimbabwe Dollar, or EZD) and the second a normal dollar that the government gets to spend. 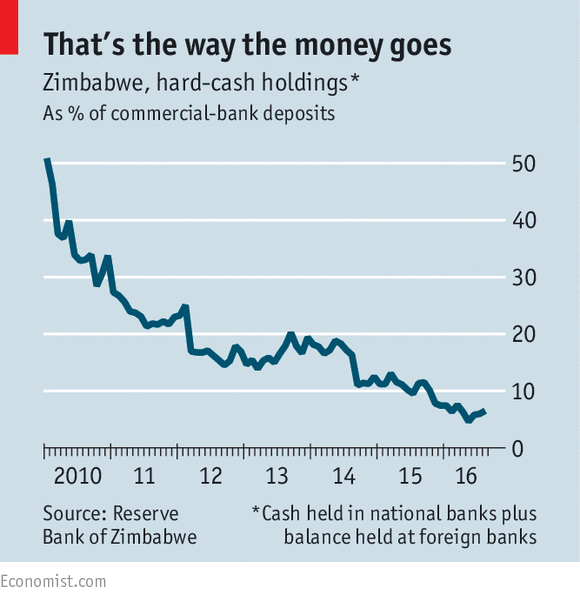 Surprise, surprise, ordinary Zimbabweans now find it hard to withdraw their own money from their own accounts. Even the official statistics admit that there are not many real dollars left (see chart). Most banks have capped withdrawals at $40-$50 a day. People line up for hours to get their money. Cash is so hard to come by that almost everyone now pays electronically using bank cards or mobile money. In the Anglican Cathedral of St Mary and All Saints a sign displays a mobile-money number for donations.

Although Zimbabwe does not officially have its own currency, its EZD is behaving a lot like one. It can be used at home (in electronic format) but not abroad. When banks ask the central bank for real dollars to pay for imports they wait months for the money, if they get it at all. Black-market dealers now convert electronic dollars into real ones at a premium of 10-15%. Many market traders now insist on being paid in cash. Airlines are doing the same.

How long can all this last? The soldiers who prop up Mr Mugabe’s regime are said to have insisted on being paid in real cash, not funny electronic dollars. Imported goods are running out. Inflation will soon reflect the growing spread between real dollars and electronic ones.

Zimbabweans have long yearned for the post-Mugabe era. Sadly, it will probably not mean a restoration of real democracy. And cleaning up the mess Mr Mugabe has made will take years.

Zimbabwe to jail anyone rejecting the new Bond Note currency

Don’t act so surprised, Your Highness. You weren’t on any mercy mission this time. Several …